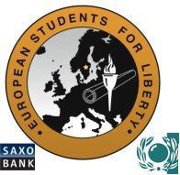 This is the conference taking place in Northern Europe this fall for anyone with an interest in political science, finance or human rights issues. Prepare for a great day with excellent speakers and dedicated participants. …
Due to the co-sponsorship of Saxo Bank & the Swedish Student association of Liberal & Conservative students associations (FMSF) the early-bird price of 10€ will be the final price.
Registration: http://www.eventbrite.com/event/3515074683 Breakfast, lunch and dinner is included, as well as the pre-party the day before! Not to mention the people who’ll be there as well as the speakers…
Email [email protected].org (or just fb-inbox @Alexandra Ivanov) if you got any questions.
List of speakers
∞ Our eminent keynote speaker is Mr Steen Jakobsen, CFO Saxobank. Saxobank has among others been named the Best White Label Solution Provider in the world (World Finance Foreign Exchange Awards 2010). Mr Jakobsen has made several comments on BBC, Bloomberg & WSJ.
∞ Nima Sanandaji has himself written for the WSJ as well as several books on topics as the welfare-state, gender equality and entrepreneurship.
∞ Mr Osvaldo Alfonso Valdés, Cuban dissident who was imprisoned in the Black Spring of 2003. Mr Valdés will share an extraordinary story of courage against oppression.
∞ Jacob Mchangama, director of legal affairs at the danish think tank CEPOS. Jacob has done extensive work on the rule of law, civil liberties & human rights.
∞ Victoria Nilsson, chairman for the Swedish studentassociation FMSF. She will share her invaluable expertise in leadership, communication and student activism. Victoria currently work in the UK parliament.
∞ Daniel Somos, chief investment strategist & Portfolio manager at the swedish company Exceed. Daniel also serve his second term as city council member in Stockholm and has almost 15 years of political experiences to share.
∞ Another great swede to join is Mattias Svensson, current editor at the magasine Neo. Mattias worked at “Citizens against EMU” long before it became fashionable, as a columnist in Metro as well as composed several books about “the nanny state”.
∞ We also have the pleasure to present one american speaker, Dr. James Lark. Dr. Lark served as the chairman of the United States Libertarian Party. He will share insights from american politics, economics and academia.
So are you interested in personal freedom, the Northern welfare models and/or free market? Are you interested in hearing more from experienced and intriguing speakers? Sign up today! A incredible 10€ registration fee is made possible due to our fantastic supporters. This covers everything from lectures to meals to the evening dinner and social. Prepare for this year’s best liberty conference! Where: Stockholm University, Metrostation Universitetet When: October 20th How: Boat (Finland/Estonia), Train, bus or car (Denmark/Norway/Sweden), www.ryanair.com(Stockholm airport: Skavsta) & www.norwegian.com (Stockholm airport: Arlanda). Be there or be square!
Facebookeventet