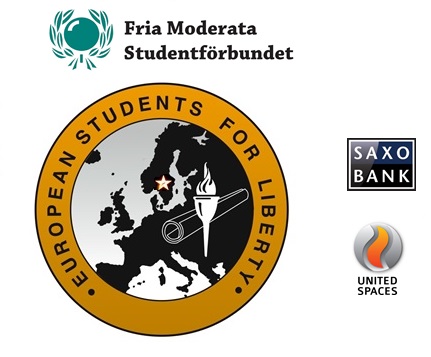 After the great success of last years’ European Students For Liberty regional conference in Stockholm, Sweden, we decided to organize a second regional conference, which hopefully will outdo last years’ success! This will be the conference taking place in Northern Europe during the fall for anyone with an interest in political science, finance and human rights issues. Prepare for a great day with excellent speakers and dedicated participants.

The registration fee is only 15€  due to our great sponsors and partners. This covers everything from lectures to meals to the evening dinner and social. Prepare for this year’s best liberty conference!

We have the pleasure to inform you that the location of the conference will be United Spaces, Waterfront building. This isn’t just one of the most central locations in Stockholm but one of the newest and most exquisitely designed offices in Stockholm.

United Spaces is a place where people, ideas and companies come to grow. They offer work- and meeting spaces which represent openness, inspiration, interaction and creativity. Or as they put it; »The New World of Work«. We couldn’t have a better location for our conference!

~ Håkan Tribell, Director of Timbro Ideas
Håkan has worked with ideas and liberal policy for almost 15 years. Formerly as a columnist at one of Sweden’s largest newspapers (UNT) and editor at the liberal magazine Neo. He will share his extensive knowledge regarding the work in a free market think-tank, the development of free market think-tanks but more importantly »How to make ideas matter«.

Note: Timbro ranked as one of the world’s leading think tanks in the international ranking conducted by University of Pennsylvania’s Think-Tanks and Civil Societies Program.

~ Pieter Cleppe, the Head of the Brussels office of the London based think tank Open Europe
Pieter has been practicing law in Belgium and has worked as a cabinet advisor and speechwriter to the Belgian State Secretary for Administrative Reform. Additionally he helped establish the Belgian Itinera Institute. Pieter Cleppe will give a talk on the topic of the current political and economic situation in Europe and discuss the possibility of a deepening euro-crisis.

~ Susanne Tarkowski Tempelhof, entrepreneur
Susanne left Sweden for Paris as a young teenager. She quickly started to work in advertising and has since started and sold a strategic communications company carrying out campaigns for the US Military in war-ravaged Afghanistan, and then a second one in Libya and Egypt during the Arab Spring. She will speak about the challenges of assisting in building and overthrowing governments, and the international systems and dynamics.

~ Rasmus Brygger, National Chairman Liberal Alliance Youth
Rasmus is one of Denmark’s most prominent liberal voices. Besides leading one of the country’s largest student associations he’s a permanent columnist at the third largest newspaper in Denmark (Politiken). Rasmus will share his experiences and talk about the wave of liberty going through Europe, with more young people then in a long time who believes in and work towards »free people and free market’s«.

~ Wolf von Laer, PhD student King’s College London
Wolf is former president of European Students For Liberty. The network grew tremendously under Wolfs leadership and is today represented in almost all European countries. Wolf will share his experience working with the ideas of liberty and how to get more people excited about these ideas. & since he spent a few summers in Auburn at the Ludwig Von Mises Institute – maybe just one or two things about Austrian economics.